Wear a Sticker - Get a Sticker Vancouver's 420 rally began in the 1990's, but by 2003, the event had petered out. Doobie Central decided to change that, so in 2004, Doobie Central hosted the 420 rally at the Vancouver Art Gallery, and about 200 people showed up that day. Doobie Central even set up a booth openly selling over 2 ounces of cannabis that day.

Before leaving, everyone made a vow to bring 10 friends next year. We all kept that vow, and in 2005, over 3000 people showed up. Doobie Central did not host the 420 rally that year, and it was a simple, peaceful gathering on the steps of the Vancouver Art Gallery.

In 2007, Doobie Central did not host the party, but instead, did a repeat of 2004, openly selling cannabis, selling over 2 pounds that day. 7000 people attended the rally that year, making Vancouvers 420 rally the worlds largest 420 gathering ever!

Doobie Central urged others to also set up booths openly selling cannabis, and in 2008, Vancouver's 420 rally became an open air cannabis market, with over 50 vendors openly selling cannabis. While Doobie Central's sales declined due to competition, Doobie Central still sold over half a pound, with many of the customers choosing to not patron the "competition" because we were the "original and best marijuana vendor". With over 50 vendors selling a half pound each, more cannabis was sold that year than in years past, and in the end, Doobie Central declared 2008 a huge success. As for attendance, the event just kept growing, with over 8000 people attending.

This incident was the inspiration for the artwork on the Doobie Central 420 Rally 2010 coin (see bottom of this page). Internally, we call this coin the "Rock 101" coin - and listen proudly to its groovy rock n roll as we work.

In 2013 again, Doobie Central set up a booth at the 420 rally, openly selling cannabis. Doobie Central sold and distributed a half pound of cannabis that day (and in less hours than in 2008). Many customers recognized us from previous years, and made a point of patronizing our booth. Over 20,000 people attended the 2013 420 Rally.

In 2018, Doobie Central chose to not set up a booth, but instead, armed with Doobie Central stickers and a video camera, conducted a survey for marketing purposes, surveying 44 random patrons to determine our brand recognition rate. Doobie Central got a 16% positive response, which has given us the reassurance to continue efforts with the 420 rally.

In 2019, Doobie Central set up an information booth, educating people about the Doobie Central brand, and its history with the 420 rally. We also had a Quebec letter writing campaign (see Quebec freedom of speech campaign below), urging people to write the Premier of Quebec to change their laws regarding cannabis swag, which blatantly goes against the Canadian Charter of Rights - and our right to freedom of speech, freedom of expression and our right to freedom of association. We did not sell anything at the booth that day. Doobie Central was a Wreck Beach vendor, selling hemp bikinis, bongs, and other cannabis goodies in the year 2004, 2006 & 2007.  We never did sell cannabis from our Wreck Beach Store, just legal branded goodies.  Doobie Central has printed up stickers to commemorate our past with Wreck Beach.


WHILE WE HAD INTENDED TO GIVE OUT THE FREE WRECK BEACH STICKERS LAST YEAR, due to circumstances beyond our control, these Wreck Beach stickers, while printed, never did get given out, and the stickers are now being saved for next summer to give out on Wreck Beach randomly one sunny summer afternoon.

Shortly prior to legalization, an anti marijuana activist group formed, calling themselves "Citizens Protecting Agricultural Lands".  Their mission: to have cannabis prohibited from being grown on ALR land.


Marijuana is an agricultural crop, and the best place for growing commercial cannabis (especially organically grown cannabis) IS ON ALR LAND.  It is best for the environment, its best for the people, and its best for the land itself.  This group, along with fear mongering and little opposition, managed a number of successes, negatively impacting rural agricultural communities along the way.


For example, in the northern half of British Columbia, the Fraser Fort George Regional District, under pressure from anti-marijuana lobby groups, made it so that only medicinal cannabis can be grown on ALR land, and not recreational cannabis, and only if the lot is at least 269ha in size.  Their reasoning for the bylaw was to prevent the loss of ALR land to cannabis producers.  The reality has been much different, with, after a year and a half of legal cannabis, ONLY 3 ORGANIC GROWERS have been certified for ALL OF CANADA!  This "loss of land" that everyone feared has not materialized, proving this bylaw to be completely unnecessary.  The only thing this bylaw is doing is preventing the locals who live in the region from bettering their lives by growing organic recreational cannabis for sale, which is causing new employment for the region to be lost.


We are winning this fight.  I have been invited by mayors of communities in the Fraser Fort George Regional District in Northern British Columbia, to establish our organic grow company in their town.  Two municipalities have offered us land. A third, unnamed mayor within the region has helped with a lot of good advise.  A number of the people we have spoken with, actually sit on the board of directors, who put this law in to begin with.  There is a good chance this policy will be overturned.  Even if not, one mayor has verbally stated "find yourself a suitable location for growing cannabis, and I will rezone the land to whatever zone you need it to be in order to you to start growing there legally."


As this problem does not just affect the Fraser Fort George Regional District, but in fact affects ALR zoning bylaws across the entire province, please write your regional district and tell them that you want to see Commercial Organic Cannabis Growers to be permitted to grow on ALR land without restrictions.


With the right laws in place, perhaps we can hope to see an improvement to the quality and price of the legally grown cannabis available for purchase in Canada.  We at Doobie Central, look forward to being part of that change!

On October 17th, 2018 - The day marijuana was "legalized" in Canada, Quebec made freedom of speech illegal. In Quebec, it is illegal to buy, sell or give away any clothing (or anything else) that either has a pot leaf or a marijuana logo. While Doobie Central marijuana would be legal in Quebec, anything on our swag page is - all of a sudden - illegal!

This new law in Quebec is a violation of our fundamental rights. We have the right to "2(b) freedom of thought, belief, opinion and expression, including freedom of the press and other media of communication". Under law in Quebec, you cannot buy or sell a shirt with pot leaves OR marijuana brand logos (such as Doobie Central logos), specifically violating your freedom of expression (which includes other media of communication - such as a shirt, bandanna or sticker).

One could also argue that this new law violates our right to "2(d)freedom of association" - as this law is very specifically targeting a specific group of people in our society, placing them under oppression as such that they cannot visibly communicate their beliefs supporting cannabis culture. Ironically, an anti marijuana shirt that does not have a cannabis leaf on it (such as an English language D.A.R.E. shirt) would still be perfectly legal in Quebec.

Please write François Legault, the Premier of Quebec, and tell him that you feel his laws violate the Canadian Charter and to demand that he remove this unconstitutional law immediately. If you happen to live in Quebec, please write your local MNA as well. Here is a copy of the letter we sent Him. COLLECT AS MANY AS YOU CAN :)

We ask that these stickers are not used for graffiti. We have heard stories about Fort McMurray, that in 2004, the entire town became littered in Doobie Central stickers without our knowledge or consent. Customers received 1 FREE Doobie Central sticker with every order. We had a lot of customers in that town. We feel that placing the stickers on the backs of signs is disrespectful, regardless what the sticker says. When we give these stickers away, we generally ask people to stick them "anywhere that is legal". If you are reading this and have received a FREE Doobie Central sticker, please respect others when considering where to place this sticker. PLEASE DO NOT TURN OUR STICKERS INTO GRAFFITI.

Stickers below in red are no longer in circulation & are a collector item. 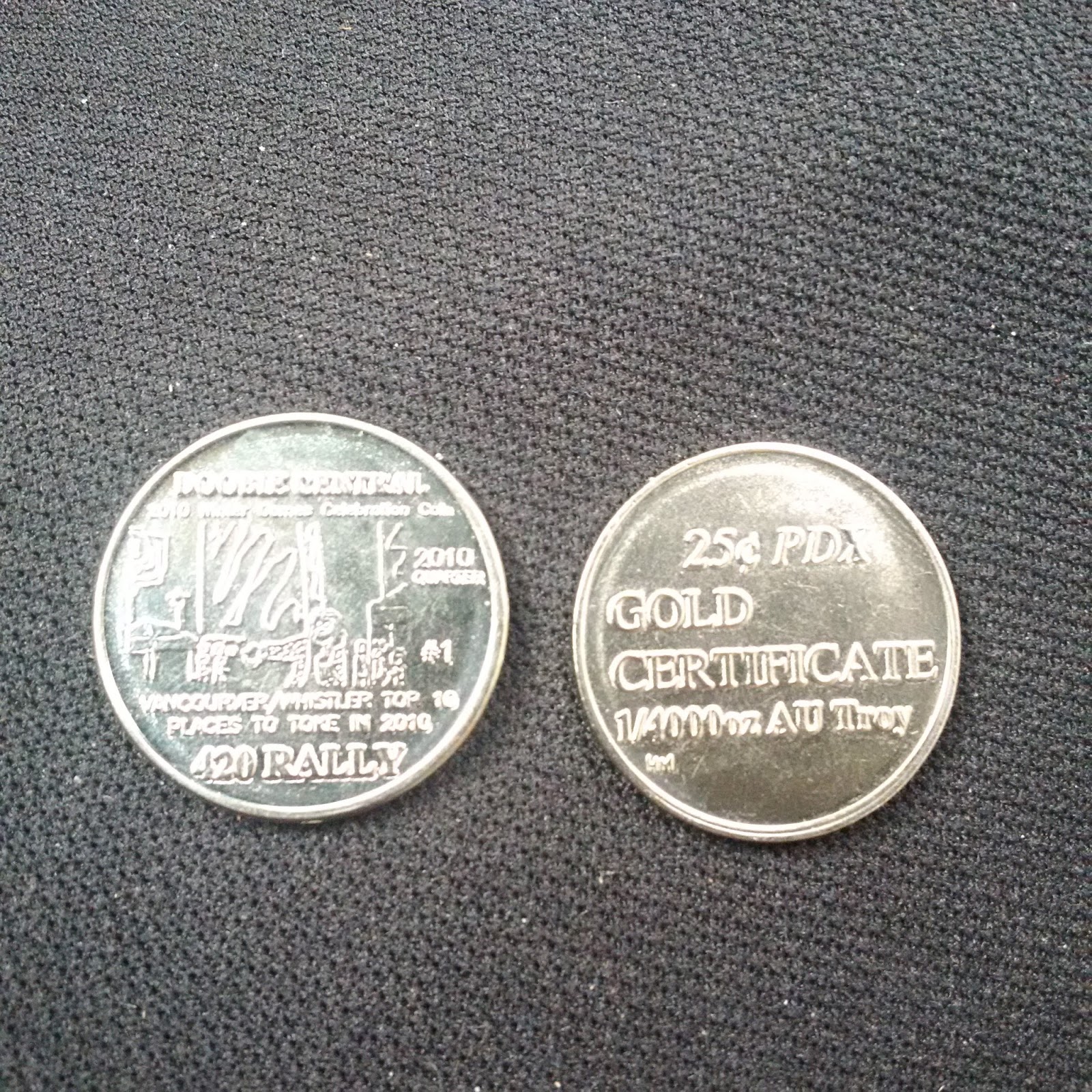 These coins are issued by Doobie Central, as well as other participating retailers. These coins are legally Doobie Central GIFT CERTIFICATES, thus making the coins legal here in Canada. 25 cent PDX coins are worth over 50 cents (Canadian Dollars) EACH. These coins have been in circulation for years, and sponsoring vendors accept these coins at a rate of 2 coins = $1.25 in trade for merchandise, which is slightly higher than the actual gold rate :).

This coin is the first of a series of 10, with 5000 coins minted. The Doobie Central 2010 quarters commemorate the winter games that occurred in Vancovuer that year. The idea of Vancouver hosting the winter games was simple: that the nations of the world could gather and assemble freely, casting aside their wars and disputes, and instead compete in sport and fun - for two whole weeks.

That said, the list of 2010 top ten places to toke is for the whole year, and not just the winter games, as should be obvious by the coin itself. The winter games were in February and early March, but Vancouvers 420 Rally was clearly in April.

The second quarter will be launched later this year, and 5000 coins will be minted again.

By accepting Doobie Central coins as change, you are not only helping financially with the fight for legalization, you are also helping support local businesses by using these coins at select local merchants.

WHOLESALE CUSTOMERS: ANY Peace Dollar (PDX) coin(s) can be used towards the wholesale purchase of Doobie Central swag. Simply give these coins to your sales representative, and the coins will be applied as a credit ($1 PDX = $2.50 CAD credit) towards your order.

NATION OF HEDONISM sells wild food products at farmers markets around BC. The Nation of Hedonism issues, accepts and honors Doobie Central coins. Coins are valid for both retail and wholesale purchases.

Doobie Central would like to give AC TAXI night drivers Brent & Doug a special shout-out and thank you for their involvement with Doobie Central Peace Dollars - These night drivers, by accepting these coins, have made a special commitment to getting intoxicated passengers home, and have put safety for the passengers as a priority over finances. These drivers would rather forego the 60-65 cents per coin in order to see passengers get home safely. Again thank-you Brent & Doug for your involvement with Peace Dollars :)

REDEEMING DOOBIE CENTRAL COINS FOR THEIR GOLD or CONVERTING TO CANADIAN DOLLARS: There is no charges or fees involved when redeeming for gold bullion.  There is a 5% administration fee to exchange back into Canadian Dollars. Each coin is currently worth a little over 50 cents Canadian Dollars each, after the 5% fee has been applied to the exchange.
Use left/right arrows to navigate the slideshow or swipe left/right if using a mobile device